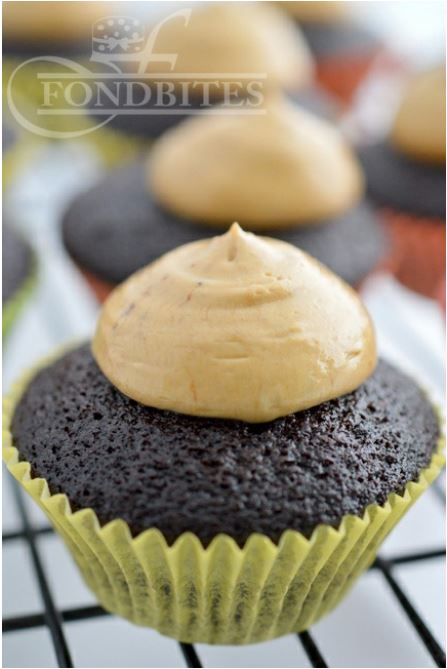 After having skipped a week, and after some detailed brainstorming I thought something decadent makes sense to compensate! Simple ones are sometimes most satisfying and everyone would agree that on a chocolate cupcake. And if that’s one of the best you have ever tried till date, is there a choice?

After getting addicted to baking mud cakes, I have started loving how the coffee is enhancing the chocolate flavor in the cake and no clue of having coffee in it. Adding to that, I’m so fond of how that chocolate cupcakes takes that reddish colour makes me feel so accomplished, though am not making a red velvet here, just a chocolate cupcake, but look at that colour

And that by now you know the recipe has some coffee in it, and for a coffee addict like me, I said the cupcake isn’t showing it has coffee, unfair if the frosting didn’t contain coffee :D. So thats a coffee cream, but what cream ? Buttercream, and so whats that so special ?, The name says ‘Rich’.. Whats that about being rich? Enough of yapping here.. isn’t it ?. I have used the protein of milk, thats the top skin layer of milk, the thick yellow film formed on milk thats boiled and let cool. I really didnt find one word to explain about that beautiful stuff, I d love to gulp it straight from my milk pan, or Basundi is one of my favourite dessert considering the fact, it has a lot of milk protein in it. Yummmm. So that’s the rich part here, liquid for the buttercream is that creamy top layer of your milk. And to all our surprise, this buttercream made using icing sugar, will all be creamy with no grains!

So its all clear now, thats going to be one rich/ultimate chocolate cupcake with rich coffee buttercream. To the recipe right away. (And that I luckily had enough good pictures to show you all, I dragged it so long )

2. Into another bowl add egg, milk, oil and vanilla extract. Whisk it well until well blended.

3. Pour the wet ingredients into the dry flour mixture and whisk it well until combined. You can use your electric beater for this.

4. Now add boiling black coffee and first beat slowly until it has incorporated well. Now increase the speed and beat for 2 to 3 minutes on medium high to incorporate air into the batter.

5. Spoon the batter into the paper lined muffin trays and bake in pre-heated oven at 175 Degree C, for 20 to 25 minutes until the cupcakes have well risen and a tooth pick inserted into the center of one cupcake comes out clean. Remove cupcakes from the muffin tray once bearable to touch and let cool on wire rack until it comes down to room temperature.

6. For the buttercream: In a bowl take the top of milk and whisk well. Add icing sugar little at a time and whisk well until it is combined. Beat for a minute or so on medium speed. Now add the butter and instant coffee powder and beat until the butter has incorporated evenly and the buttercream has lightened and airy. This process will take 2 to 3 minutes on medium high speed. Buttercream is now ready to be frosted.

7. I decided to keep the frosting simple, because the flavour is so elaborate. I used a big round tip nozzle, filled it up with the buttercream and held it at 90 degrees on top of the cupcake leaving 1 cm gap between the top of cupcake and the end of my nozzle. Squeezed with nice pressure, let the frosting flow making a big base, slowly moved my hand up reducing the pressure in my hand, stopped the pressure completely and then I lifted my nozzle off the cream. Simple doom with a sharp tip on the top. I like this very much. You can but creatively come up with different piping ideas. Top them with sprinkles, make chocolate garnishing and the ideas are endless.

Would you like a picture of the inside of the cupcake ? :P, I pushed it to the last.. And one thing I like about cupcakes, I finished one full cupcake before I really pictured them all :D, Count and find out now :P. Until I find out one other recipe that out beats this one, this is going to be my favorite ultimate chocolate cupcake recipe.

This has been baked for Fondbites, Bake Along,a group of enthusiastic bakers, bake one recipe every week along with me. To join the group, send a join request in the facebook group and I will send you a confirmation message, after you confirm that you will bake every recipe with me each week, I will add you to the group.

Recipes of previous Bake Along can be viewed here

Members – Once after you finish baking, post the link of your finished picture below using the linky tool.

Bake Along #30 – Best Vanilla Cupcakes Ever